It's turned up it's toes

Steadfast is ten years old and so I believe was the 12 volt Shoreline fridge; note the 'was'.
Yes folks a dead or dying fridge is no use to man or beast so we have had to source a replacement.
After much trawling around the internet we found what we needed, size being a critical factor in the choice, but also saw that the supplier, Shoreline, wanted £45 to deliver.  Plan B then.   Could Midland Chandlers get this particular model for us?  The advantage is that we are only 6 miles from the Penkridge branch of Midland Chandlers and they would take the old fridge for us.
They called me back to say that Shoreline wouldn't supply this model to them but they had an Inlander fridge that would fit our space. A quick call to Joe who was at the boat, to go and look at the fridge and if okay, pay for it.  Picking it up, and more importantly getting the old fridge out of it's snug location and off of the boat was a two man job to be tackled when I was on hand to help.
Last Friday we both travelled up to Hatherton and performed the said task, old fridge out and off of the boat and new fridge collected, unpacked and installed. 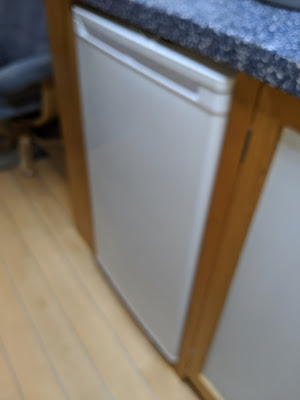 It occurred to me that whilst all this was going on it was me that it was walking backwards along a narrow pontoon, over the gunwale and down the steps into the boat...a bit of a Ginger Rogers to Joe's Fred Astaire...and he jammed my fingers between the fridge and the bulkhead... Did Ginger have this to contend with?

Just a note about Midland Chandlers Penkridge who couldn't have been more helpful. we were really impressed with the service provided.
Posted by Lesley K at 04:20 7 comments:

No more Department of Guesswork

When we started this boating malarkey in 2008 we faced the usual dilemma of what loo system to opt for.  It was fairly simple then with only two choices, pump-out or cassette.  Today you can choose from a pump-out, cassette, incinerator or 'composting' system. The conversations about boat toilets have just got wider along with the wider choices now on offer.
In 2008 we opted for a compromise between the two standard variables and had a vacuum loo fitted that emptied into a cassette.  We never regretted the decision to use cassettes though we can't say the same for the vacuum loo which was replaced with a Thetford over time.  On our second boat we had fitted a ceramic bowl Thetford, a simple effective system to our minds, we have never been tempted by a pump-out but guess what, Nb.Steadfast has a pump-out system!
Does it stay or does it go?

The holding tank is under the well deck and reading the boat manual the size of the holding tank is given as 220ltrs but there is no gauge to indicate how full the tank is....or isn't.
There is on board a back-up Porta Potti which was hurriedly released from it's cubby hole the day after arriving at our home mooring as the light on the loo went red the morning after passing the last pump-out facility en route... Is this Sods Law in operation?

In all respects the loo works, we cannot see how a cassette system can be fitted without destroying a perfectly good shower room, neither of us are keen on the separation system that is a 'compost' toilet and an incinerator option is a hungry gas user so, the loo stays.   Joe has fitted a new non return valve, don't ask...but there was an incident.  This week Joe has been fitting a tank gauge so no more surprises and hopefully no more use of the low-to-the-ground Porta-Potti that is less than kind to creeking knees! 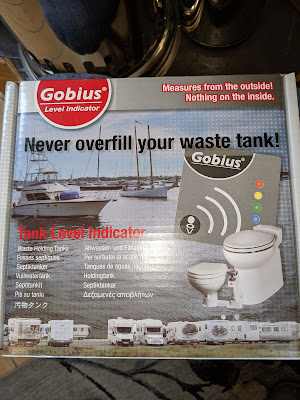 The product, a Gobius level indicator. Works like sonar sending a pulse and depending on how long it takes to read depends on the level of the tank. 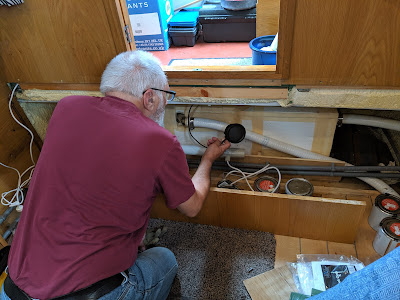 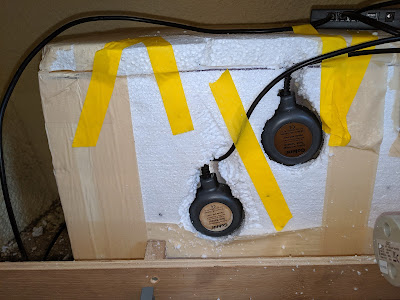 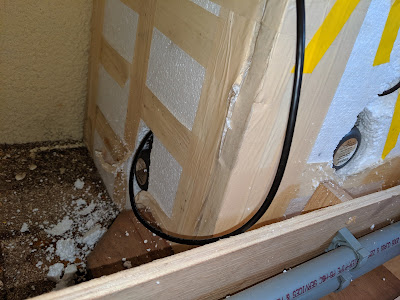 The lower sensor on the side of the holding tank