We traveled over to the boat last Tuesday afternoon as Steadfast was going in to be blacked.  We have decided to have her grit blasted and two packed. While she is out of the water the tunnel bands will be repainted and the can't seats REMOVED.
Wednesday morning we moved her through the lock on the stump of the Hatherton - Lichfield canal to the work shops of Phil Jones Marine for the work to be done. 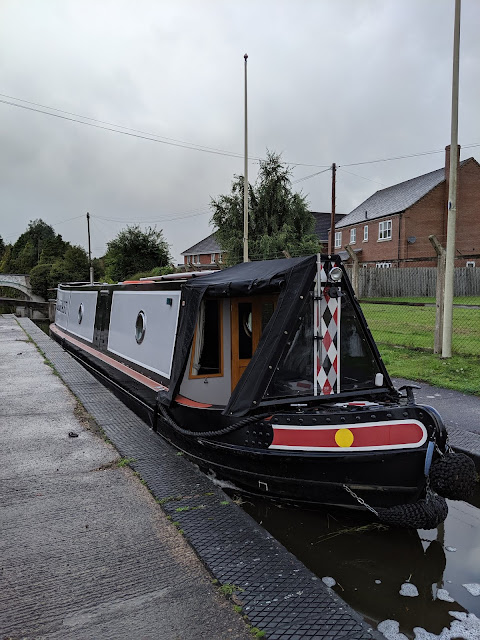 The ’Thumper’ has been rebuilt and modified

Ahead of our last trip out on Steadfast we have had her single cylinder engine, the Thumper,  refurbished and modified.

The vintage Russell Newbery DM1 worked well but Joe was concerned about a small but persistent oil leak from the top of the engine.  He thought the head gasket needed changing and was going to do it himself but instead we called upon the expertise of Richard Milligan ( known as 'Blackhands') who is reputed to be a bit of an expert; and so it turned out.

So, bear with me as I am not technically minded but what I understand is that when this engine was initially built it's lubrication was a simple reservoir of oil and a wick to oil the rockers, however when it was subsequently modified it was to a pressurised oiling arrangement, with me so far?
The cylinder head  didn't cope with a pressurised oil supply hence a leak. The decision was made to modify the cylinder head to cope with a pressurised oiling system and while we were at it to replace the piston liner and the big end shells and the piston rings.  The head and block went to Bradlbury' at Market Drayton for machining, the Russel Newbery parts were sourced from Dave Bixter at Granthams Bridge Boat Services.
Four weeks later Richard returned and rebuilt and tested the engine and we tested it on our subsequent cruise to Stouport and back.
Posted by Lesley K at 08:12 No comments:

We plan to add solar panels to Steadfast next year allowing us to sit quietly for a couple of days without having to move or run our engine. For now we are moving each day to charge our batteries but since changing the old fridge for a new one we find that an hour of running our slow revving engine brings the batteries up to float. When we first moved the boat from Crick to Yelvertoft and then to its home mooring at Hatherton we were have to run for between 3 and 4 hours each day to achieve the same thing. Changes made, largely the replacement of a dying fridge, but also a twelve volt TV and dedicated charging points for tablets and phones seem to working well.  Everything on board works well, the bed is so comfortable we are reluctant to leave it in the morning, the shower is good and we are happy converts to a pump-out loo.
The boat handles well for a flat bottomed ditch crawler and the reduced length and weight compared to a 68' Caxton and a 66' Yarwood, our previous boats, is just right for us as we stack up our years.

The tail end of last week Steadfast's engine was refitted after major modification and a rebuild. On Sunday we travelled across to Hatherton Marina with the car stuffed with food, booze and clothes and prepared to get out and cruise; at last..

The engine wouldn't start. I kid you not.

Joe tried all the obvious things, whatever they are, and ended up removing the engine room decking, climbing down into the nether regions of  Steadfast's rear end and dismantled the starter motor, before reconnecting everything up again.
It started!  That was it, we were off.

We headed south on the Staffs and Worcs stopping overnight only two and half miles from the Marina. The next day we called into Oxley Marine for a pump-out (£14) and with an empty tank Joe was able to calibrate the new gauge he has fitted to the waste tank; no more surprises when the light goes red in future.

We moored up at Wightwick, six or so miles and three locks later because I wanted to go to Wightwick Manor the NT property only yards from bridge 56.  We have been up and done the S&W canal so many times but never stopped to visit this amazing place and we were not disappointed. 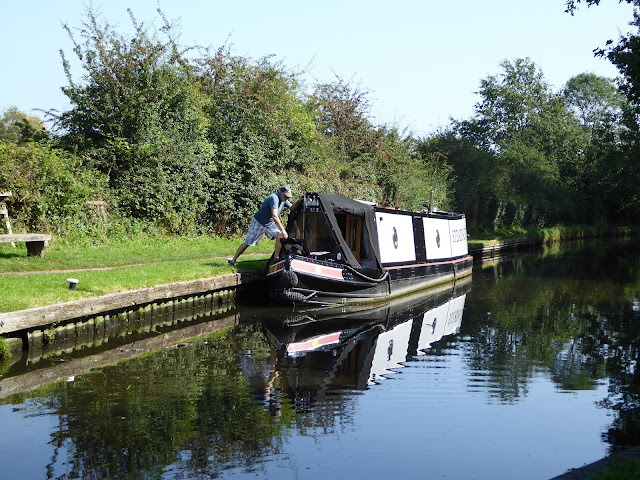