Half six Monday morning saw Joe and I strapped into the car and en route to Penkridge from Peterborough.  We arrived to find Steadfast all in order, got the kettle and the fire on and awaited the arrival of engineer Richard Milligan who was going to fit the new starter motor. 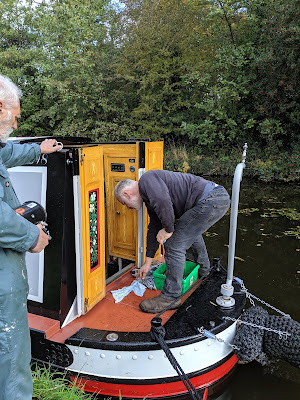 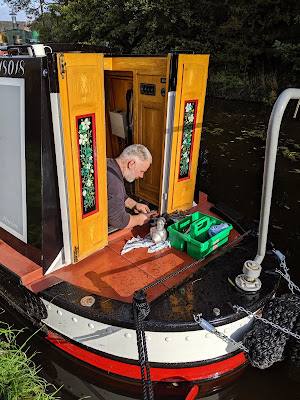 Richard arrived at 10am as promised, encumbered with tools and soon in the possession of a cuppa he set to work to switch out the starter.  An hour later all was done and Steadfast fired up.  I then drove to Great Haywood to hopefully arrange a temporary mooring.. the breakdown had thwarted our attempt to get to Tamworth so we have a three week wait before our road is clear of CRT repairs.

We were lucky, one space left in the marina.

Richard had followed me and gave me a lift back to Penkridge and the boat.

We set off at 3pm after visitors David and Amanda left us to head off to visit a boat builder they had an appointment with. 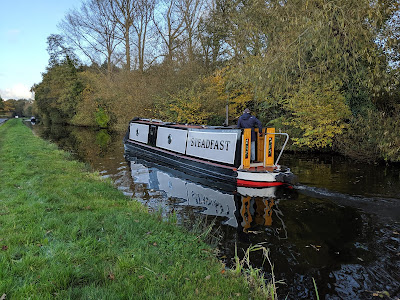 We made it to Radford Bank before the light failed. Mooring up we were asked by a fellow boater where we were headed. Great Haywood we replied, "You won't get through, they have scaffolded the railway bridge today and it is too low to get through."  Heart sinking I tramped on to have a look at the railway bridge followed by an extremely grumpy husband.  Torches in hand, pitch black by now, we arrived at the railway bridges to find...NO SCAFFOLDING!!
Thank you God. We tramped back to the boat and went to the pub for supper.